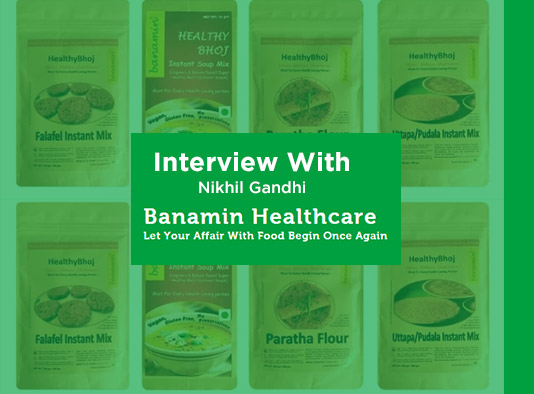 My journey started with Shell in Malaysia where as a part of job activities I used to visit Shell / JV / 3rd Party refineries around various parts of South East Asia and most of them were actually at coastal areas, remote locations. So the food choices therein were very limited.

Our USP is very simple. We are not just focusing on a single nutritional-value point like protein. We are providing the balanced nutrition.

Please give us some background to your journey.

My journey started with Shell in Malaysia where as a part of job activities I used to visit Shell / JV / 3rd Party refineries around various parts of South East Asia and most of them were actually at coastal areas, remote locations. So the food choices therein were very limited.

Further most of the eateries, chefs in such remote locations used to consider anything and everything with vegetables as a vegetarian dish. During my first journey itself I had a big shock as the so called vegetarian food served to me was actually cooked in pork oil. ,Such instances became quite common of late so from a safer side perspective I used to consume only liquids and juices. Most of the beloved foods like cakes, chocolates, breads were out of the question as those contained eggs. And that was the hardship. A few of my colleagues turned non-vegetarians too for survival. I tried consuming ready-to-eat meals and somehow didn’t like the taste, mainly because of the preservatives. Tried multiple options for a few months and realised that there isn’t actually a solution to this problem. From here, basically, this thought came to my mind:

Why don’t I create some recipes, easy recipes, including three or four ingredients, which will give nutrition and also the joy of eating good food?

I anyway love cooking so why not give this idea a try.

Gradually, I started realising that people started loving the things I was making.

There was quite a good response on that. And that triggered the thought of doing this aggressively.

I realised there were and still are a lot of people who struggle not only for food but nutritionally rich food. This led me to think deeper into what I want my brand to bring to the table. After a lot of deliberations, I had decided to take a leap of faith to start R&D activities to understand about the products’ commercial feasibility and took it forward from there. 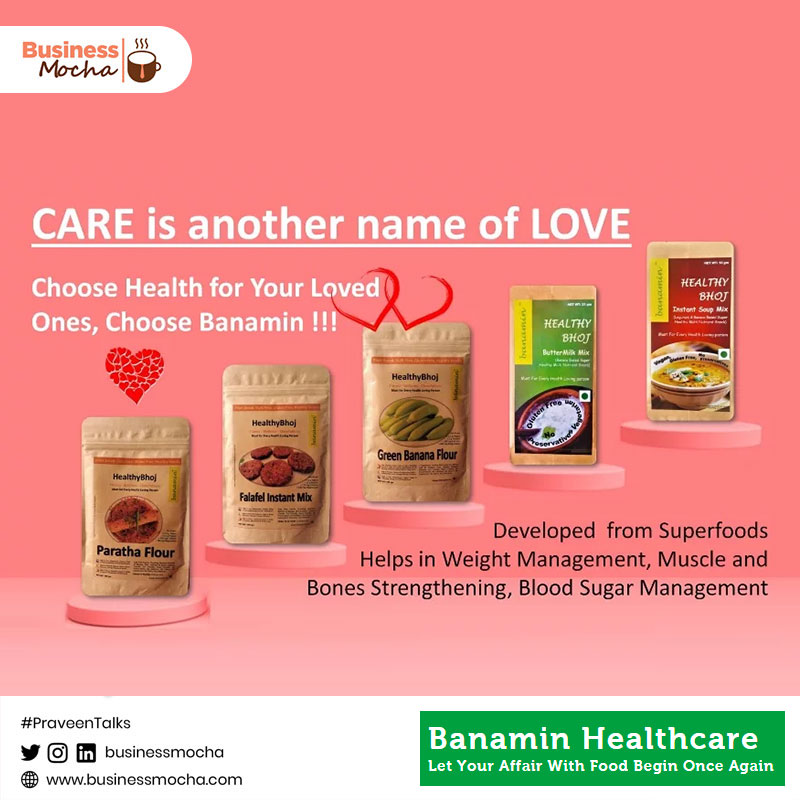 Where did this name come from? What's the story?

The name comes from putting together Banana and Minerals. The major ingredient in our products is banana because I have realised out of all the food available, Banana actually gives you everything from nutrition angle.

It is rich in minerals. It has high satiety.

It has tryptophan inside it, which makes you cheerful and calm.

So basically, it is a complete food!

Banana along with a combination of Vegetables, Legumes, Beans provides right nutrition properties for various aspects like diabetes, spots nutrition, weight management, general nutrition and thus the name Banamin and Banamin Products both came into existence..

How do you define your USP?

Our USP is very simple.

All our products are 100% Clean Label products

We are not just focusing on a single nutritional-value point like protein. We are providing the balanced nutrition.

And most importantly we are giving people the joy of eating their food.

Do you see a global presence for Banamin?

Absolutely, in fact, ours is a gluten-free, dairy-free, nut-free, soya-free product. So one of the important target audience for us is actually the people who are suffering from food allergy-related issues.

Currently, we are selling in Malaysia. We are having a presence in Singapore. We did sampling in Australia and Canada. We got good results over there. We are also working towards catering for Indian palates. We have developed Pre-mixes for the Indian meals and snacks. All of this is working well, so far!

How did the COVID impact you?

Initially, we were affected very badly. All towns were shut, we made some investments, and everything had gone down. From March till June, it was surely a setback. Thereon, I started seeing it as a blessing in disguise. Why? Because it has surely changed the mindset of people and has driven them towards eating healthier food. Earlier, we had to educate people and now people are coming forward to us asking what kind of products we can offer them.

So where do you see your startup in five years?

Definitely somewhere great! All our products are actually supplements which we have converted into the food products. We are currently catering to the both B2B and B2C segments. For B2B, we tie up with the cafes, restaurants, hospitals or canteens and the food manufacturers who are into health food manufacturing and create pre-mixes for them. So there is an enormous potential in what we are doing and we can’t wait to see how it unfolds!

What was your biggest entrepreneurial fear?

Further, switching the field to food & nutrition industry after spending 14 years in Oil & Gas was also playing its own role

Further, Financially, we had made a choice that we are not going to take any investment upfront.

We wanted to put enough time into R&D activities. We didn’t want to enter the market as soon as we start making the first product. Our intention was very clear that we develop a portfolio of products and then enter into the market. We were secured from Financial point of view but challenge was really to commercially make products without using any chemicals !!!

Is your startup still a self-funded, venture?

Fantastic that's actually really commendable. Because in the startup industry, nowadays we mostly look into how much investment people have raised as compared to, the value of the product and the service. I think what you're doing is very good.

Well, I am a bit orthodox when it comes to business. For 14 years I was playing with balance sheets only. The important aspect of my job was to ensure that the refineries should be making profit. So I understand the importance of having Real Money in Bank.

I just didn’t want to chase the customers initially and create something big where the profit is zero. Further, when I was starting this, I wanted to have a free hand to create the products rather than worrying about giving exit to investors. Today we have around 30 plus products and around 200 plus recipes. Now we are stable, we know where we are and we definitely know how much expertise we have right now with us so that we can face the competition, and eventually win. Further, as we have developed inhouse proprietary processing technology, even if the competitor tries to copy our products, they won’t be able to achieve nutrition values and shelf life without adding the chemicals !!! So we are bit relaxed on that front. This could not have been achieved had we taken the investment upfront.

However, having said so, we will definitely look for funding when we will be scaling up to the next level. Because Investors just do not bring the money to the company but they also bring their network and it is impossible to scale up without the support of a good network.

What would be your advice to new entrepreneurs or people who are starting this journey?

I think I have learnt two of the greatest lessons in my journey. Happy to share with you:

First, and foremost, important thing is that Work On Your Concepts. It took me three years to analyse and understand that my idea is commercially feasible. Of course, then I was working alone on my idea along with a full time job It’s never easy to work alone on ideas. If you have a supporting team, definitely it will work out faster. But it is important to work on the concept development before jumping so as to ensure that it is a viable thing.

Second thing is that at least have two years of your savings before taking a leap of faith. Because the business is a totally unpredictable territory. We never know what’s going to happen. I’ve seen a few of my colleagues and friends who left along with me to start their own ventures, they just left back within six months because they could not sustain the pressure of their mortgages and other expenses. Business normally does not give you an immediate income, it takes more than six months to eight months, even if you have connections.

So these two points are very important.

Be sure to keep them in mind before starting!